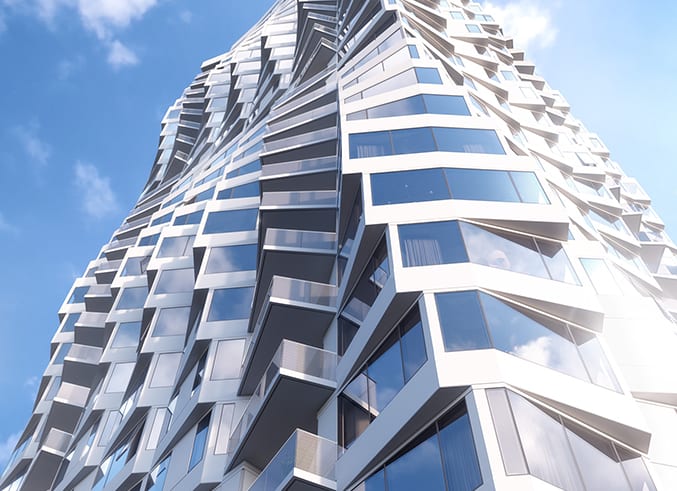 
Just a few blocks west of the Embarcadero, a new condo tower is on the rise on Folsom Street amid a flurry of new development in San Francisco’s Transbay District.

Contractor Lendlease is up to the seventh story of the building, branded as Mira, designed to reach 40 stories and 400 feet in the air in a structure that will house 392 condos.

“We have a very unusual design from Jeanne Gang, great views, and a broad spectrum of sizes and price points,” said Carl Shannon, senior managing director for Tishman Speyer, the project’s developer.
The developer hired Polaris Pacific to handle sales, which will kick off in October ahead of completion in fall of 2019. Tishman has not released the pricing for the homes that will range from studios to three bedrooms.

Forty percent of Mira’s condos will be set aside as “below market rate” units affordable for households earning up to 100 percent of the area median income. In San Francisco, that means up to $82,900 per year for one person, $94,700 for two people or $118,400 for a family of four.

The name Mira means “to look” in Spanish, a nod to the expansive views residents will enjoy as the site is a few blocks from the city’s waterfront, Shannon said.

“Living here, you’ll be very near downtown and close to jobs, but not in the middle of the city,” he said.
Just a few blocks from Mira, the Salesforce Transit Center and Park recently opened, bringing a central hub to the burgeoning Transbay District, which encompasses about 40 acres around the transit center.
Mira, at 280 Spear St., was previously known as Block 1 or 160 Folsom St. The project is one of several new housing developments slated to add more than 4,400 new homes to the area.

With a mix of affordable and market-rate homes, Mira also embodies the city’s goal of creating mixed-income housing, Shannon said. Other Transbay condo projects such as Jay Paul Co.'s 181 Fremont and Related California's The Avery are targeting the ultra-luxury market.

The project also includes six townhomes that will face Clementina Street on the north side of the building and about 10,000 square feet of ground-floor retail space mostly lining Folsom Street.

The building incorporates a low-rise building and the 40-story tower with a twisted, “forward-looking” design.

“Reinterpreting the classic bay windows of San Francisco, our design amplifies the dynamic quality of the neighborhood,” said Jeanne Gang, founding principal of Studio Gang, the architect on the project, in a statement. “Spiraling all the way up this 400-foot tower, bay windows create unique spaces in every residence that offer fresh air, expansive views and changing qualities of light throughout the day.”

Tishman has been one of the busiest developers in the Transbay District and nearby Rincon Hill including three condo developments off the intersection of Main and Folsom streets. First was the 650-unit Infinity towers, next was the 656-unit Lumina that only has six homes left to sell, and now Mira.

The developer is also working on 870 homes in a two-tower design from architect Bjarke Ingels Group at 655 4th St. and a 917,000-square-foot office project at Fifth and Brannan streets.