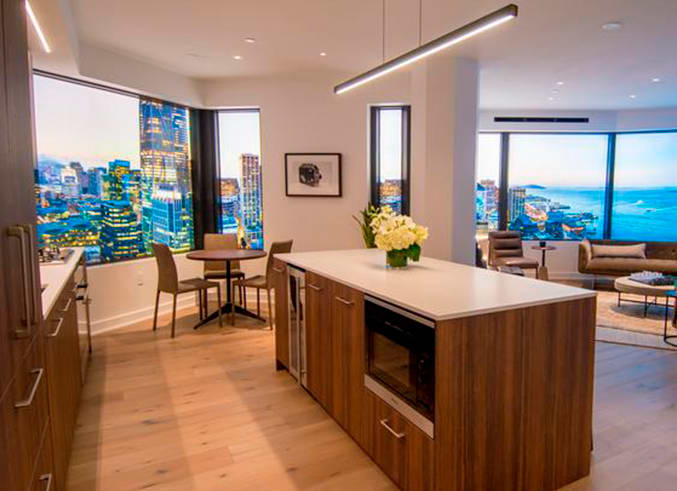 
A new condo complex at the corner of Spear and Folsom streets is about a year away from welcoming future residents, but would-be buyers are already snapping up homes.

Pre-sales for Mira, a 392-unit condo project in the Transbay district, started this week with a release of 32 homes. More than three dozen offers came in over a few days — before developer Tishman Speyer even started signing contracts with prospective buyers.

The developer plans on releasing a few units at a time until the building opens late next year and will also release the top floor penthouse units closer to completion. Like most condo projects, buyers can't close on their home until the building is complete. In the meantime, prospective buyers typically sign contracts and put down deposits for specific units.

The building’s selling points include proximity to the city’s waterfront and jobs as well as views of the bay and city and the building’s finishes and features, Shannon said.

The project also includes six townhomes that will face Clementina Street on the north side of the building and about 10,000 square feet of ground-floor retail space mostly lining Folsom Street. The building incorporates a low-rise building and the 40-story tower.

“Folsom Street will become the backbone of this neighborhood,” Shannon said.

Designed by Chicago-based Studio Gang, Mira’s aesthetic is defined by a modern take on bay windows. The design creates a twisted look on the exterior of the building and also means that every unit has a different floor plan. The contractor on the project is Lendlease.

“The bay windows that make up the dynamic façade create welcoming architectural spaces inside, offering fresh air, expansive views, and changing qualities of light throughout the day in every home,” said Jeanne Gang, founding principal of Studio Gang, in a statement.

Tishman aimed to provide a wide range of price points that a variety of buyers could afford and not just the high-end with home prices in the $1,500 per square foot range.

Tishman Speyer started developing Mira in 2014 and was able to lock in prices with contractors years ago, making it possible to keep costs down compared with other projects developers are trying to start now. Construction costs have soared in recent years making some projects financially infeasible.

Meanwhile, other developers have no choice but to go for the very high-end to justify the construction costs, Shannon said.

Tishman Speyer dove in as one of the early pioneers in the Transbay redevelopment area, a 40-acre patch of SoMa surrounding what is now known as the Salesforce Transit Center.

The transit center opened in August, but is now closed because of cracked support beams. Meanwhile, numerous office towers in the Transbay district are open or under construction including Salesforce Tower, the tallest building in San Francisco that encompasses 1.4 million square feet.