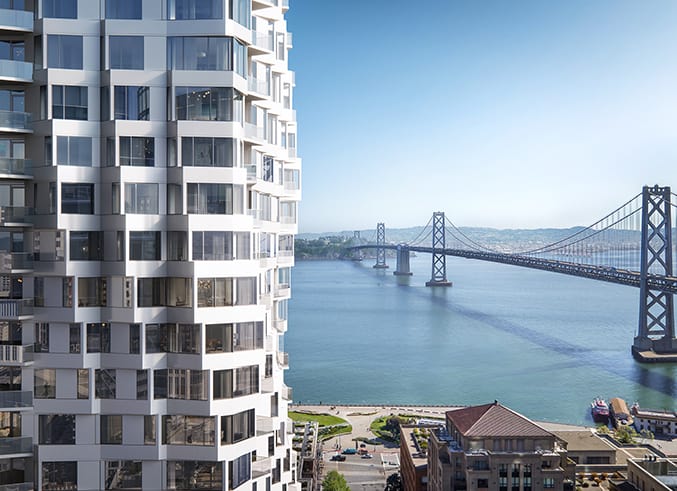 
MIRA, the upcoming Studio Gang-designed building previously known as the Folsom Bay Tower—and colloquially known as the “twisting tower” due to its rippled and corkscrewed facade—announced Wednesday that it’s looking for potential buyers who are “now able to register their interest on the project’s new website.”

The final building isn’t slated to begin actual sales until this fall, and move-ins won’t begin until late in 2019.

The recently launched MIRA site consists mostly of a registration form, a few new renderings of the building’s facade, and the “Do the twist” ad tagline.

The 40-story, 392-unit high-rise received approval from the city in 2016, but didn’t break ground until late last year.

Along with the new site, developer Tishman Speyer floated a few new renderings of the building, showing off its corkscrew design from different perspectives and emphasizing its “right up on the Bay Bridge” Spear and Folsom location.

Architect Jeanne Gang, whose other designs often emphasize rippling, wavy motifs, says that the twisted trademark look “evolves the classic bay window, a familiar feature of San Francisco’s early houses, reimagining it in a high-rise context” and that the aim was to “make every residence a corner unit.”

No word yet on how much a home in MIRA will cost, but it’s not going to come cheap. Despite the well-heeled nature of the building and its future tenants, MIRA prevailed during its usual bout of contentious City Hall hearings by appealing to sympathies and offering 44 new below-market-rate units if the city agreed to up its zoning by 100 feet.