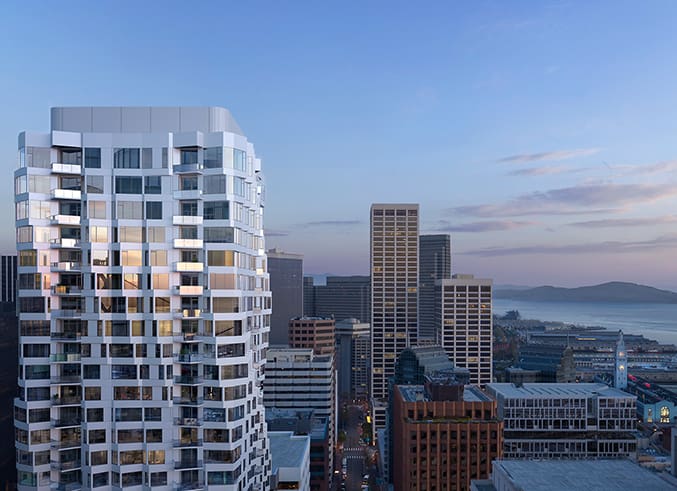 
US architecture firm Studio Gang has revealed new renderings of a 40-storey apartment building in San Francisco, which will feature reinterpretations of the city's "classic bay windows" spiralled around its exterior.

Planned to reach 400 feet (122 metres) high, Studio Gang's Mira tower is under construction at 280 Spear Street in the city's Transbay neighbourhood. The site is one block away from Rincon Park and a portion of eastern waterfront facing San Francisco Bay, known as Embarcadero.

The latest visuals show boxy windows that will gradually twist in different directions to provide residences with views of the city, the water and the nearby Bay Bridge.

The forms are based on the bay windows found across San Francisco, according to Studio Gang founder Jeanne Gang.

"Reinterpreting the classic bay windows of San Francisco, our design amplifies the dynamic quality of the neighbourhood," she said in a project statement.

"Spiraling all the way up this 400-foot tower, bay windows create unique spaces in every residence that offer fresh air, expansive views, and changing qualities of light throughout the day."

The developers released visuals of the building last week in a bid to entice potential buyers as construction moves forward, although sales will not officially open until the autumn.

"With construction of Mira well underway, we're getting closer each day to delivering this stunning new community for the benefit of the flourishing Transbay neighborhood," said Tishman Speyer's Carl Shannon.

"We're enthusiastic to have the opportunity to once again enhance San Francisco by bringing an exceptional, world-class architect's vision to the skyline with an innovative, perspective-shifting tower."

Residents will also have access to a host of amenities inside the building, such as a private dining room, club lounge, a fitness centre, a children's playroom and a "dog-washing station".

Valet parking for 340 cars – including charging stations for electric vehicles – bicycle parking, and 10,000 square feet (929 square metres) of shops on the ground level are among the other facilities.

Close to both the waterfront and downtown, the neighbourhood is rapidly developing around the recently completed Salesforce Transit Center, which will eventually connect to multiple public transport networks.

Studio Gang – which was placed at number 252 in the 2017 Dezeen Hot List of the world's most newsworthy forces in design – was founded in 1997 and now has offices in Chicago, New York and San Francisco.

The firm's other projects on America's West Coast include plans for curvaceous tower in Los Angeles' Chinatown.