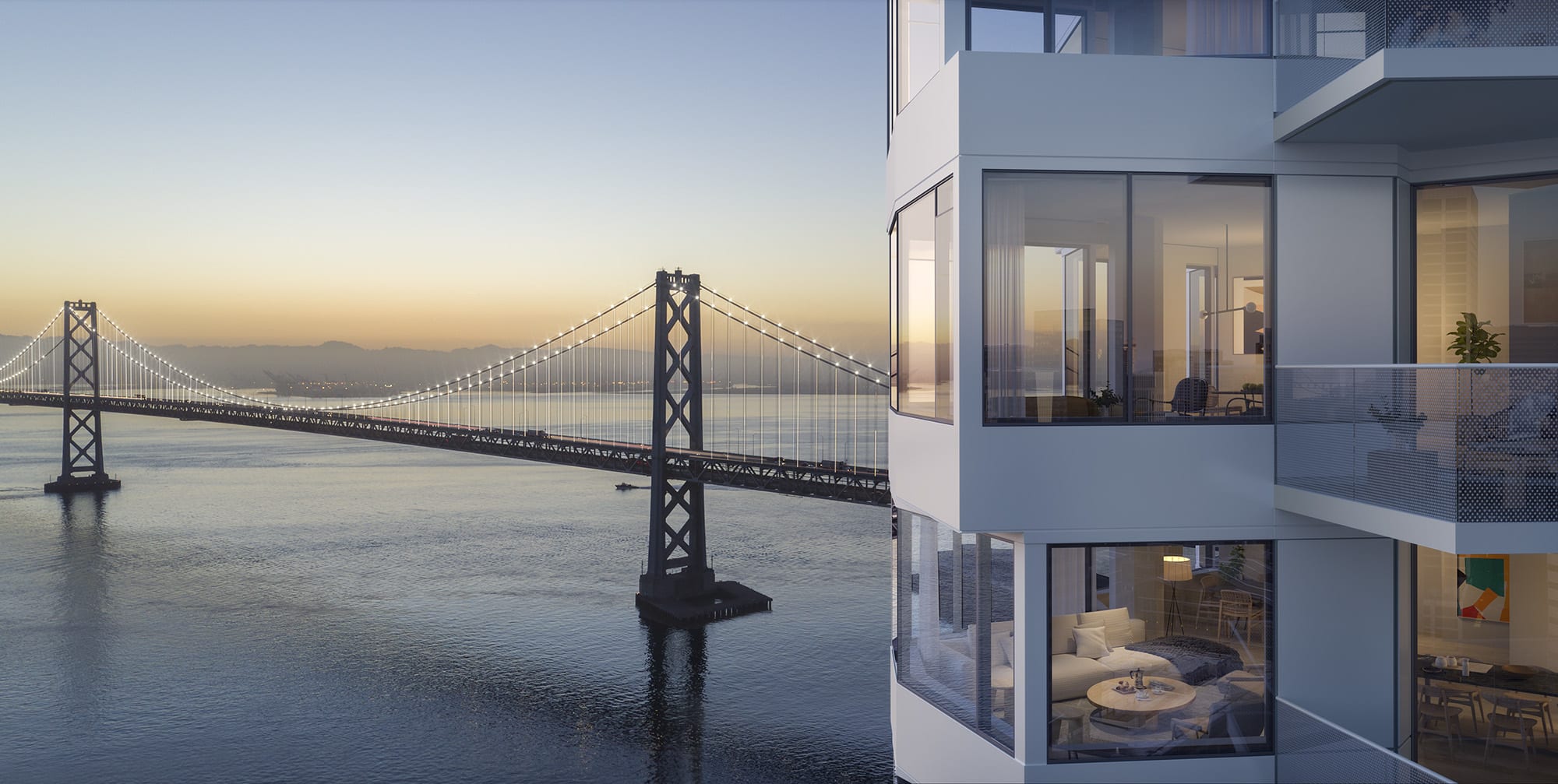 
At the point where the Embarcadero meets SoMa, a newcomer has emerged in San Francisco’s growing skyline.

The 400-foot-tall high-rise with fanning windows looks like a Jenga tower that was carefully twisted.

Located at 280 Spear St., the condo high-rise called MIRA is still under construction, but the building topped out last week and its white facade appears mostly complete.

The architect Jeanne Gang of Studio Gang says MIRA’s spiraling shape comes from a reinterpretation of the classic San Francisco bay window, with the windows’ orientation changing on every floor. The design “amplifies the dynamic quality of the neighborhood,” Gang says. The varied positioning of the windows also makes the floor plan in each unit unique.

The 40-story building will feature 392 luxury condominiums and townhouses of various sizes. Onsite amenities include a rooftop deck, a fitness center, a children’s playroom, dog washing station, valet parking for 340 cars with electric vehicle charging stations, parking for 150 bicycles, and over 10,000 square feet of retail at street level.

One bedrooms start at just over $1 million and 2,300-square-foot three bedrooms with bay views are listed for as much as $5 million.

Most anywhere else in the U.S. except for coastal cities, these numbers are shockingly high, but in San Francisco, where the median price paid for a new or existing home or condo in March 2019 was $1.38 million, the prices aren’t surprising for luxury housing.

“There’s a range of price points in the project,” said Carl Shannon, a senior managing director at Tishman Speyer, the company developing the building. “One of the things we’re trying hard to do is to meet different buyers at a number of different income levels.”

Construction began in mid-2017 and occupancy is slated for late 2019.

San Francisco’s skyline has gone increasingly vertical in the past two decades. Since 2000, more than 15 structures with more than 30 stories have been built. The city now has 160 buildings taller than 240 feet and more are planned or under construction.

The most visible newcomer is the Salesforce Tower, a colossal column of glass at 415 Mission that became the city’s tallest building at 1,070 feet when it opened in 2018. It surpassed the 853-foot-tall Transamerica Pyramid that had long been the city’s tallest since being completed in 1972.

Another big addition was 181 Fremont; the mixed-use building at 802 feet is the city’s second-tallest building. Perhaps the most talked-about skyscraper built in the last decade is the Millennium Tower, the city’s sixth-tallest building that’s sinking and tilting, resulting in multiple lawsuits over repair costs.